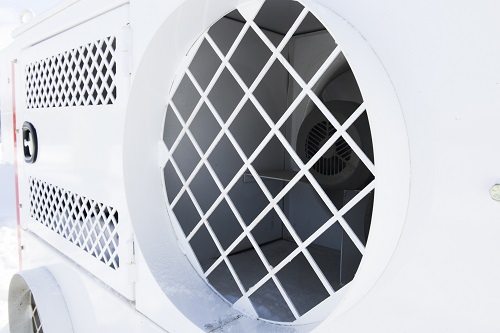 In 2008 a project manager at a major energy company came to us with an interesting request. The manager was responsible for overseeing a quarter of one of the large processing facilities located in the boreal region north of Fort McMurray, Alberta.

On his section stood an array of 200 valves through which bitumen flowed and was transferred around the facility. His job was to ensure that during shutdowns, the valves stayed heated to keep the bitumen flowing. If the temperature dropped by more than 10F, his crew would have to take the valve apart and chip out the solidified bitumen—a costly and time-consuming task. To ensure this didn’t happen, he installed at each valve:

In total, his costs during a shut down in his section amounted to 400 Frost Fighters, 200 generators, and 200 workers—working continuously around the clock.

The design of a new heating solution

The manager came to us for an improved heater that would allow him to reduce the number of dedicated people. He had seen the 3.6M BTU heater we built for Advance Coating Solutions in Edmonton, Alberta and he heard about our skills in customization and innovation with heater technology. He asked us to build a heater that:

We developed an indirect air heater that met these requirements and more.

We built it to deliver .8M BTUs and we designed a new heat exchanger, making it capable of reaching high air outlet temperatures more quickly than anything else of similar size on the market…

To do better on the problem with mobility, we fit a diesel generator inside the unit, so that the heater plus generator could be moved in just one trip. In consideration of its compact shape, we called it the “cube” heater…

For each of the 200 valves, now the manager could replace two Frost Fighters, a generator, and a fuel tank with a single cube heater for half the cost. And he could eliminate a large percentage of dedicated labour while achieving higher reliability and efficiency.

We built the first five heaters and called the client to come and pick them up. That’s when we got the surprise… We were told that the manager had just been terminated from his job. Furthermore, he never had the authority to place such an order. Well okay then! We quickly found some new customers and rented out all five heaters. These customers liked them so much, they bought them. It proved to us that our revolutionary heater had a market. And we know that these original heaters still perform exceptionally well, because we provide the maintenance for them today. Since the development of the first five heaters, we made further improvements:

That was 2008, and we still have not seen anything comparable on the market to these indirect air heaters. We like to think we have the best product that meets customers’ needs, but we can’t know for sure unless you tell us.

So, we’d like to know: What can we do to improve indirect air heating for you? Drop us a note.