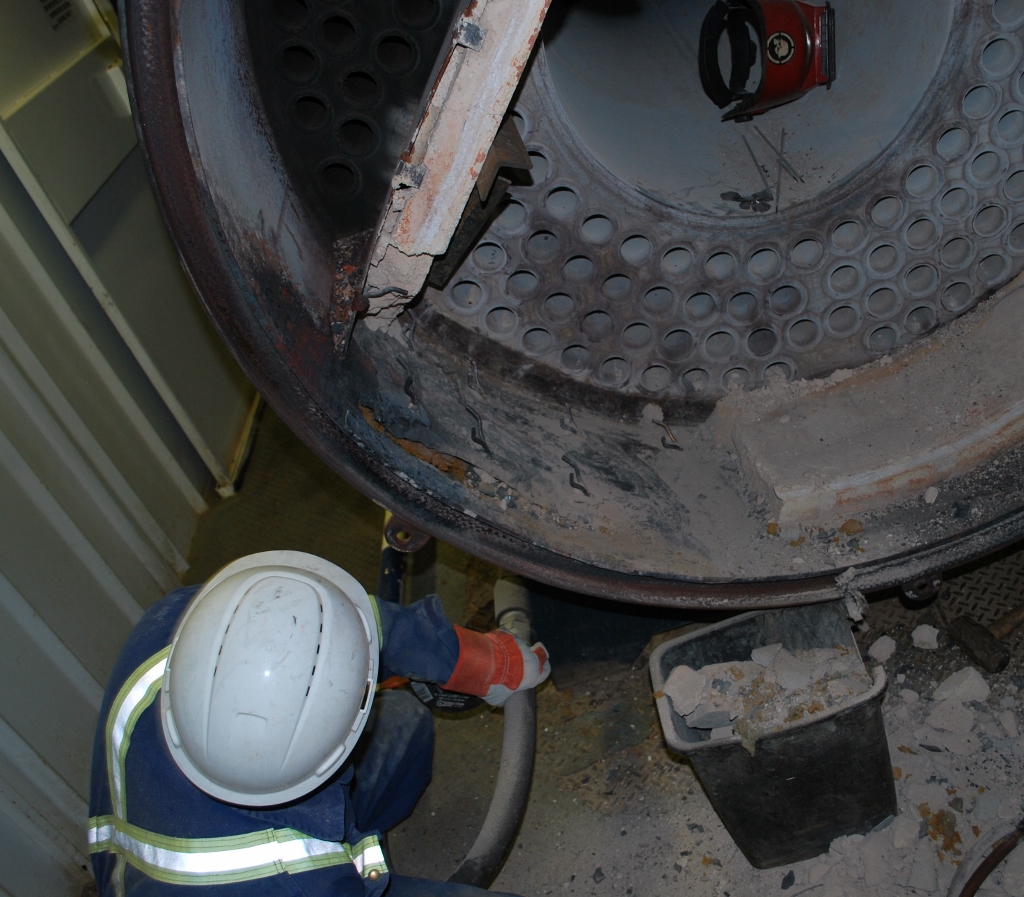 The operator was making his routine check on the boiler when he spotted clinker through the observation glass of the fire tube. Clinker, which is formed from unburned diesel fuel, is not unusual.

He stopped the flame, opened the firetube, pulled out the clinker, and restarted the burner.

Hours later, the operator made his next round. As soon as he opened the boiler room door, he could see trouble. The paint on the back door of the boiler and the shell was changing colour. Immediately, he shut down the boiler and called us.

Discoloured steel is a strong indicator of exposure to excess heat. It’s also a sign that the composition of the steel may have changed. I knew that if this boiler was going to be repaired, it would have to be transported to our shop.

However, the customer was not willing to let the boiler leave the site. So, the welder and I drove out to the boiler on the site, six hours north of Edmonton.

We determined that some of the fire tube door’s refractory, the heat resistant concrete seal, had crumbled when the door was closed after the clinker was removed. When the burner restarted, flames had shot through the cracks and reached the steel shell. In a matter of hours, the steel got so hot that the carbon was burning away. What remained was the flaking iron.

Normally, most customers would be placing an order for a new boiler. Or they would ship it to a shop for repair. However, this boiler had been in place for years on this site. The company was not going to allow operations to be disrupted.

We were asked to fix it on site. And so, over the next several days, that’s what we did.

First, we jackhammered out the refractory. The discoloured area was only 8 x 18 inches. We used a grinder to “feel” where the bad steel ended and the good steel began. The piece we cut out was 10 x 26 inches.

Next we welded in the plate we had brought from the shop that we had pre-formed to match the curvature of the shell.

The last step was to replace the refractory. We molded the cement in a form and then applied it to the bridge with a silicone-ceramic seal. At the end of the cure period, we used the tape-and-rope method to test the seal.

The whole job took only 40 hours of elapsed time. This includes the site safety orientation, daily toolbox meetings, and the paperwork for the hot work permits for the welder, torch, and grinders.

I’m not sure whether many boiler service companies would consider making a repair like this on site. But in the end, we saved a lot of time and thousands of dollars in crane rental and trucking by not bringing the boiler to the shop.