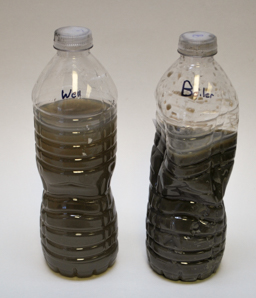 Boilers need a steady supply of water, and the water needs to be reasonably pure. But how pure?In the heated boiler, the water’s dissolved minerals become concentrated. That’s why regular blowdown is critical. The valve is opened to drain sediment out of the pressure vessel. Then the boiler is topped up with fresh water, diluting the concentration of minerals.

A boiler can always accept potable water. But if you are going to draw on local, untreated sources, for instance a water well, what is the acceptable standard of quality for a boiler?

That’s what a drilling company would have liked to have known, before their boiler collapsed.

The drilling rig was in a remote area in west-central Alberta. The company’s rig contract with the producer specified that the producer was to provide fresh water. The producer paid to have a water well drilled, but the water was not tested.

Murky-looking water is usually acceptable because it passes through filters before it enters the boiler. However, this well-water had unusually high quantities of calcium carbonate, calcium bicarbonate, magnesium carbonate, and magnesium bicarbonate. It also had a lot of superfine clay, that is, clay particles so small they were invisible.

Because clay particles attract water molecules, they were permanently suspended in the water. The clay would never settle out unless the water is treated with reverse osmosis…or boiled.

When the boiler started up and the water reached 400F, the hydrostatic charge was lost and the clay precipitated rapidly. It happened so fast, that the clay particles landed like a load of dirt on top of the tube.

The weight of the clay collapsed the main fire tube. At the same time, the clay behaved like firebrick—providing extremely high insulation between the fire tube and the water. As a result, steam and water leaked into the fire tube. 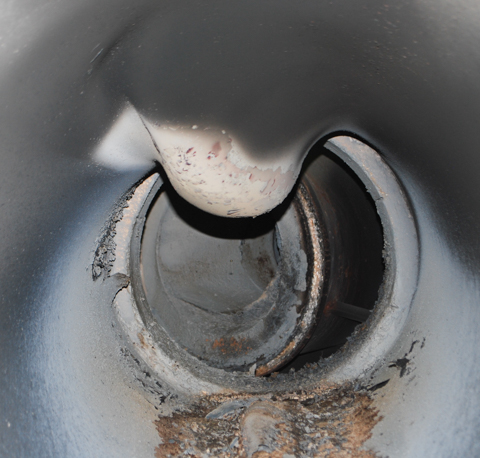 In this photo, you can see the collapse. It’s the bowl-shaped deformity dipping down from the top of the fire tube. 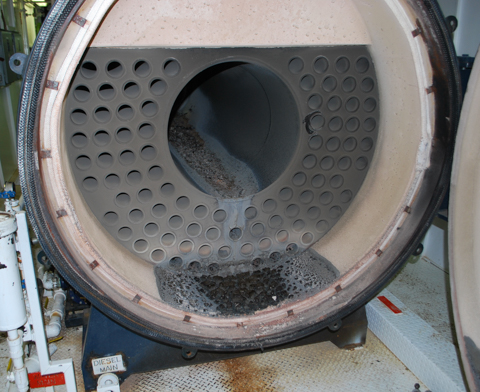 At the bottom of the tube is a layer of minerals and clay. 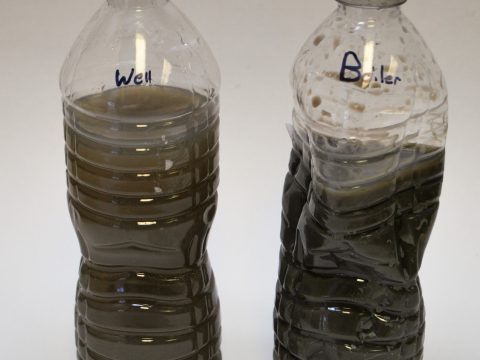 Here is the well water on the left, and the somewhat darker, more concentrated boiler water on the right. This photo was taken a week after the incident. As you can see, the clay is never going to settle out.

How to use untreated water

If you are going to use untreated water for your boiler, there is a simple purity test you can try.

Boil some of the water in a pot. When the volume reduces by 50%, check the bottom of the pot for sediment.

Most of the time, we enjoy very good access to water that we can safely use. An incident like this reminds us that it’s still worth testing the water, even for industrial processes.